Manufacturing and health care led Canada’s employment growth in May, adding 22,000 and 21,000 jobs respectively. Despite solid job gains in May, unemployment remains unchanged at 6.8% due to an increase in the number of people seeking work. 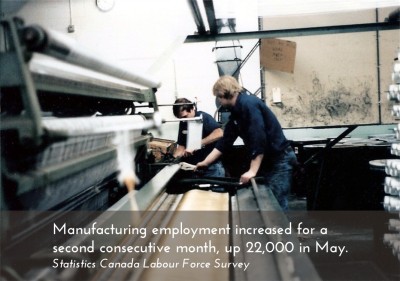 Employment is up 192,000 compared to May 2014. The national unemployment rate has held steady for the fourth consecutive month. This is welcome news considering recent lay offs at Target, Future Shop, and the oil downturn.

Ontario enjoyed the largest employment increase at 43,900, followed by BC at 30,600. Nova Scotia employers added 3,700 jobs while Alberta, Manitoba, New Brunswick, and Newfoundland and Labrador saw losses. Saskatchewan remained flat.
Alberta shed 6,400 jobs in May, edging up unemployment by .3 percentage points to hit 5.8%, its highest rate since January 2011 but still lower than the national average.

The U.S. is regaining momentum, adding 280,000 jobs in May. Unemployment rose slightly to 5.5%, up from last month’s 5.4% as more people participated in the labour market. The sectors with the greatest gains are health care and hospitality, with employment increases of approximately 57,000 each. Construction came in third at 17,000 jobs added.
The U.S. has responded to a tightening labour market by raising wages by 2.3% on average. Increasing wages and growing opportunities south of the border could mean increased competition for Canadian employers looking for skilled workers.