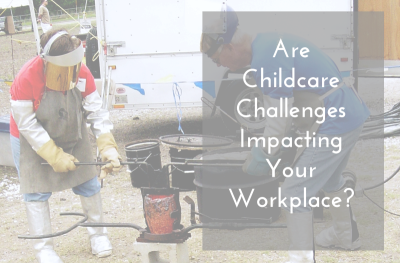 Canada has one of the highest rates of employment for women with children in the world. The participation rate of nearly 70% gives Canada economic advantages that other countries would love to have. Studies have shown that increasing women’s participation in the labour market to male levels could boost GDP by as much as 21% in Italy, 19% in Spain, and 15% in Japan. The world is recognizing that with an increased dependence on skills and knowledge, the mothers of the world can have a huge impact on the bottom line if they return to work.
Canadian women’s participation in the paid workforce has increased over the last few decades, for example in business and finance, where the proportion of women is 51%.  However —  and this next statistic comes as no surprise to those of us who work in recruitment — women are still not well represented in fields such as construction, trades, transportation, manufacturing and natural resources.  Over the nine years that I have recruited for industrial journeyperson trades, I have personally only placed one female in an Interprovincial trade position.
There may be lots of reasons why these industries have so few female workers — but let’s look at a very practical example: childcare. While the stereotypical role of a mother is changing, and there are many fathers who look after children, it’s still the default for women to be responsible for childrearing.

In Victoria, BC, infant childcare hours of operation are typically 7:30 to 5:30.  Many journeyman and power engineering positions work shift work such as a morning shift from 7 a.m. to 3 p.m., or in a manufacturing environment rotating 12 hour day and night shifts.  Either way, trying to line up childcare around a rotating schedule, or shifts that extend beyond typical daycare hours, is a huge challenge.
Beyond hours, childcare costs are constantly popping up in Canadian politics and in workplaces where there are a high percentage of parents.  With median child care costs climbing above $1000 a month in many Canadian cities, returning to work with 2-3 children in childcare can be a difficult financial choice.

Childcare Concerns Around the World

Countries recognize the importance of women in the workforce and the challenges of childcare as issues that need to be resolved for the health of the economy.  Governments are investing in providing resources that enable women with children to return to work.
The 2015 Federal Election and platforms presented by Conservative and NDP leaders are attempts to address some of the financial concerns but nothing on flexibility has arisen in Canadian politics, despite the fact less than 16% of the board seats in Corporate Canada are held by women[2].   In 2003, the UK successfully introduced “Right to Request” legislation that empowers parents with children up to the age of six years the right to request flexible working hours of their employer.
In Japan where the country is desperately trying to help 8 million women return to the workforce and the president wants 30% of women in leadership positions, 70% of women quit their job after having a child[3].  Japanese women quit for two reasons: lack of flexibility in the workplace and lack of available childcare.  Despite a desire to continue working, studies show that the primary reasons Japanese mothers don’t return to work after having a child is because working hours making childcare infeasible[4].  In addition to this, demand for childcare is so great, that women who want to return to work are unable to do so for years because they can’t find care for their child.
What is Canada doing to encourage women in industry or recognize one of the glaring obstacles to their participation is simply the typical hours of work?  Should the government provide incentives or legislation for male dominated industries or should companies in these industries simply recognize the requirement to modify work schedules in order to attract more workers, who happen to be mothers?

What Employers Can Do

Childcare is a huge obstacle in working long shifts, but there are ways to improve a work environment to attract parents by increasing flexibility. For example:

Skilled people are in scarce supply.  Before changing a shift to a 7 on 7 off 12-hour day schedule in an attempt to compete within the industry, think of the people you are eliminating from your workforce by implementing hours of work that rule out a parent with a child in daycare.

[1] The Parent Trap – Child Care Fees in Canada’s Big Cities
[2] Catalyst Accord: Women On Corporate Boards In Canada
[3] Japanese Women and Work: Holding Back Half the Nation
[4] Womenomics 3.0: The Time Is Now