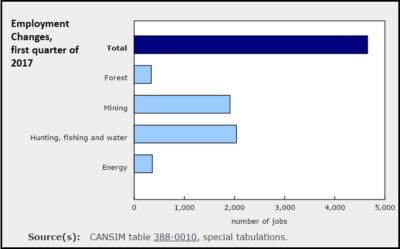 Statistics Canada has released their Natural resource indicators report for the first quarter of 2017 and nearly 5,000 jobs were added in just three months. This can be useful for those actively seeking work, or those considering a career in the Natural Resources sector.
For the first quarter of 2017, the total economy GDP (Gross Domestic Product) grew by .09%, and almost half .04% of that was from the Natural Resource sector. The sector is made up of the Energy subsector (66%), the Mining subsector (20%), Forestry (8%) and Hunting, Fishing, Water, and others (4%). 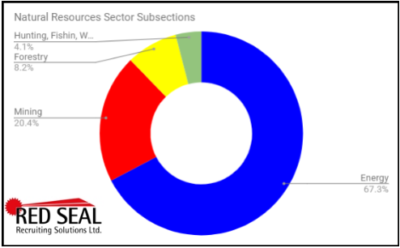 Commodity Prices are up in international markets which is one of the reasons for this growth. The Energy subsector is up by .07%, having added 361 jobs. So keep an eye out for jobs in industries like biomass, hydroelectric, power lines, and petroleum. Comparatively, the mining subsector grew by .04% since the last quarter, adding 1,900 jobs. So although there was a decline in coal exports, there are still a healthy number of jobs available in base metals, steel making coal and diamond mines.
Meanwhile, Hunting Fishing and Water added 2,040 jobs, and Forestry added 341 jobs to the total 4,650.
http://www.statcan.gc.ca/daily-quotidien/170619/dq170619a-eng.htm?HPA=1