For years, recruiters have talked about the proliferation of fake recruiter profiles on Linkedin. Linkedin and its community have been able to remove most of these profiles but Linkedin now has a bigger problem. The social aspect of the LinkedIn news feed is allowing fraudulent job offers to be promoted to hundreds of thousands of LinkedIn members, all free of charge!

Fake job offers used to be found in newspaper classified ads and then moved into email spam. We are now seeing them move into their largest scale yet, on LinkedIn. Linkedin is unique in that users offers up personal work histories that could allow targeted job scams, in a way never done before.

One example is a United Kingdom, “Recruitment Agency” that has been consistently posting about job vacancies they are trying to fill in the USA, Canada, Australia and asking job seekers to type “Yes” in the comments section.

This results in tens of thousands of people responding and in the example below, 35,000 desperate jobs seekers requesting to be hired and liking the posts. The irony of Linkedin new social feed is this has results hundreds of thousands of people seeing these fake job ads. Anyone who is connected to a person that liked or commented on these posts will see it in their feed, and one post for “jobs in Canada” that does not exist received 54,943 responses. 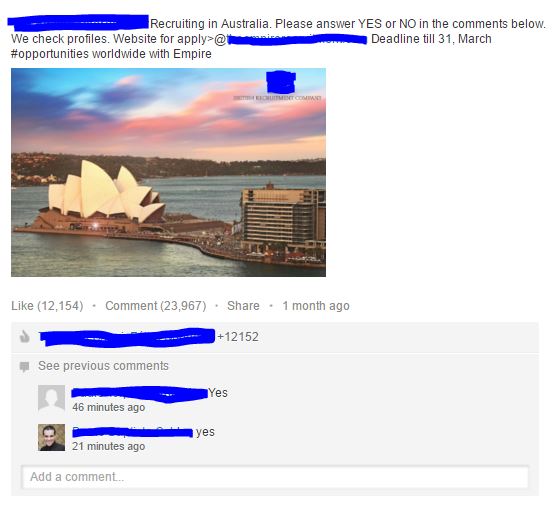 After investigating this agency, past employees have confirmed, they have no jobs in Canada, the USA or Australia and only recruits to United Arab Emeritus. The UAE has working conditions and wages, which have been described by the Guardian as “Prison like” http://www.theguardian.com/global-development/2015/apr/04/migrant-workers-uae-saadiyat-island-abu-dhabi-battery-hens
“According to ILO’s most recent global estimate, there are at least 20.9 million victims of forced labour, trafficking and slavery in the world today.” Linkedin could become one of the best vehicles for recruiting and deceiving desperate people. With the promise of jobs easy to disseminate and fraudsters able to tailor the perfect pitch to desperate job seekers based on their profile.
How can individuals protect themselves from fraudsters and human traffickers on Linkedin and in other online scams?

In this case, I reported the Agency’s post to Linkedin, but with thousands of such reports a day, Linkedin has not yet responded and the posts continue. I will send a letter to governing body in UK in this case.