Early in 2014, a young man from Victoria, BC, pointed at his employer and said that the hiring of temporary foreign workers was standing in the way of Canadian applicants. 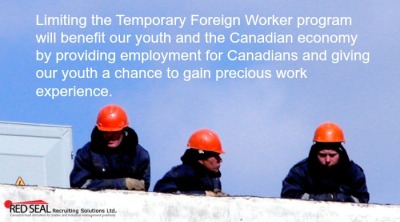 He had noticed that many of his Canadian peers had had their hours reduced to the benefit of the TFWs employed there, and that Canadian resumes were being passed over for TFWs.
This was the most serious complaint made to date by Canadians across the country who feared they were being displaced by cheaper labour from abroad.
In response to these complaints, the government acted decisively by launching an investigation and eventually establishing rules to make the hiring of TFWs more difficult for businesses. Among other new regulations, it removed employers’ ability to request low-skilled temporary foreign workers in regions where the unemployment rate is higher than 6%. The government also now demands that all employers requesting TFWs prove they are making extensive efforts to recruit and train Canadians and requires $1,000 per requested employee (increased from the previous $275).
Because of its effects on the employment marketplace, especially in low-skilled jobs, limiting the TFW program will benefit our youth and the Canadian economy by providing employment for Canadians and giving our youth a chance to gain precious work experience for their future careers.

Still many TFWs in Canada

Despite the limiting measures applied to the TFW program since 2013, the first quarter of 2014 showed a continued increase in Temporary Foreign Workers hiring, and it looks like Canada is on track to hire well over 200,000 TFW this year on top of over 380,000 TFW who were already here on December 1, 2013.
Jason Kenney, federal Minister of Employment and Social Development, said that requests for TFWs have dropped 74%. So why are we still seeing continued hiring of TFWs?
First, there is an obvious bureaucratic lag between the introduction of new measures and their actual implementation on the ground. With initial approvals given for 6 months and Canadian Consulates taking up to 7 months to process the requests, we will start to see the effects of the 74% drop only in the early months of 2015.
Second, the government has announced no changes to the programs that allow over 50% of Temporary Foreign Workers to come into Canada. Provincial Nominee, NAFTA, International Work Experience exchanges with Commonwealth and European countries and LMIA-exempt visas were responsible for 259,590 internationally trained semi-skilled or skilled workers hired in Canada in 2013. The government has grown these categories in recent years to the point where we are seeing the BC Provincial Nominee Program swamped with applicants, resulting in 8-9-month wait times, and the Alberta program virtually overwhelmed with thousands of employer sponsored applicants.
The focus of the measures, then, have been limited to the low-skilled TFW programs that allow the fast food, nanny, care aids and agricultural industries to bring in employees from outside Canada. However, limiting the hiring of foreign low-skilled workers in these industries will have a beneficial impact on Canadian youth and the economy.

Since the recession of 2008, unemployed Canadians have had a hard time. At the same time as some young Canadians struggle to begin their careers, Canada has over 300,000 TFWs currently employed, including an estimated 80,000 in BC. If these workers are preventing young Canadians from finding jobs, it is critical to take mitigating measures, as lengthy periods of unemployment can cripple a career, resulting in decades of low wages and underemployment.
In particular, 49,800 youth in British Columbia are having a difficult time finding their first job and are currently unemployed.
Low-skilled positions are likely to be the most affected by the changes to the temporary foreign worker program, and 5,000 youth could benefit. Employer-sponsored international worker recruitment in British Columbia accounts for approximately 17,000 workers per year. Of these workers, at least 10,000 appear to be low-skilled or in roles that would take less than 10 months to train for, such as fast-food workers, nannies, care aids and harvesting labourers.
With the limiting measures to the federal TFW program, Employment and Social Development Canada hopes to reduce TFW hiring in these positions by as much as 50% in the next three years. Employers that compete for low-skilled workers will see increased competition and may be required to provide more training or higher wages to attract and retain employees.
High youth unemployment and underemployment can have a devastating effect on a country’s economy. Lower lifetime earning potential, high debt levels and limited disposable income means less money spent in stores, which in turns shrinks the economy further. By ensuring that our youth find gainful employment during and after their schooling, we ensure a better economic future for all of us.