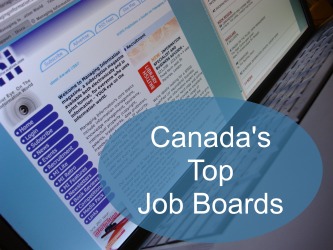 Few employers ever bother to place ads in newspapers anymore. The workforce is now mostly digital, mobile and definitely tech-savvy. The same has happened to job posting and job hunting.

In 2015, we are continuing to see a shift in how Canadians search for work and where employers publicize their open positions. Some experts in the recruiting world say that that more jobs are being found on Facebook and Twitter, while others believe that Linkedin is the top place to not only search for jobs but also to develop professional networks.

However, the truth is a little more complex–as it usually is.

Similarweb is a company that estimates web traffic. It has recently compiled a top 50 list for Canadian employment and career sites. After removing some duplicates, it ranked the following sites as the top 10:

What we see here is an interesting mix of a rapidly changing job board market in Canada, and surprisingly Linkedin and Facebook are not on the list. The Jobbank website, which has often been seen as an entry-level or blue collar place to find a job, is number two, and a job aggregator is number one, followed closely by two paid job boards. Number 10 is the French version of Jobbank, and there is at least one Québec-specific board (number 5) on the list.

It appears that only 5,400 jobs in Canada are listed on LinkedIn. Like Facebook, Linkedin is huge sourcing of white collar networking and comes in as Canada’s 12th most visited website overall (according to Alexa), far far behind Facebook, Google and Youtube. It is definitely a niche market, but people who use LinkedIn well can change their lives by developing professional networks aimed towards improving their career prospect.

Taking a look at the job banks, we find that over 30% of the jobs listed come from other sites like Monster.ca, Workopolis, Workbc and Saskjobs and only 73,000 are actually placed on the site. Job aggregators like indeed.ca, wowjobs, jobrapido and simplyhired are reposting jobs from other websites.

The federal government’s Jobbank also now allows employers who have their marketing together to post jobs automatically. Interestingly, the site does not allow any custom text and will soon be the main way for companies to hire internationally, if Jason Kenney has anything to say about it.

Here’s what to do

So after all this, what’s my advice? For job seekers, go ahead and set up job feeds from Indeed and Jobbank, but also set up a professional LinkedIn profile and clean up your Facebook profile. No need to have friends spill the beans to your next potential employer how you can over indulge on the weekends.

Employers should submit their positions to one or two paid boards and get listed on Indeed.ca and Jobbank.