Collective agreements in Ontario automotive plants will expire in 2016 and Unifor, Canada’s largest private sector union, will be targeting three of the world’s largest—and now profitable—corporations for a new deal. Workers on production lines and in skilled trades will be hoping for raises, and according to their union, more job security.
Can millwrights, electricians and machinists in the Windsor-Toronto corridor expect the same type of wages their counterparts in oil, gas, and mining have achieved, or will low commodities prices and intense competition for manufacturing plants in the U.S. and Mexico stop the continued spread of Fort McMoney hourly wages? 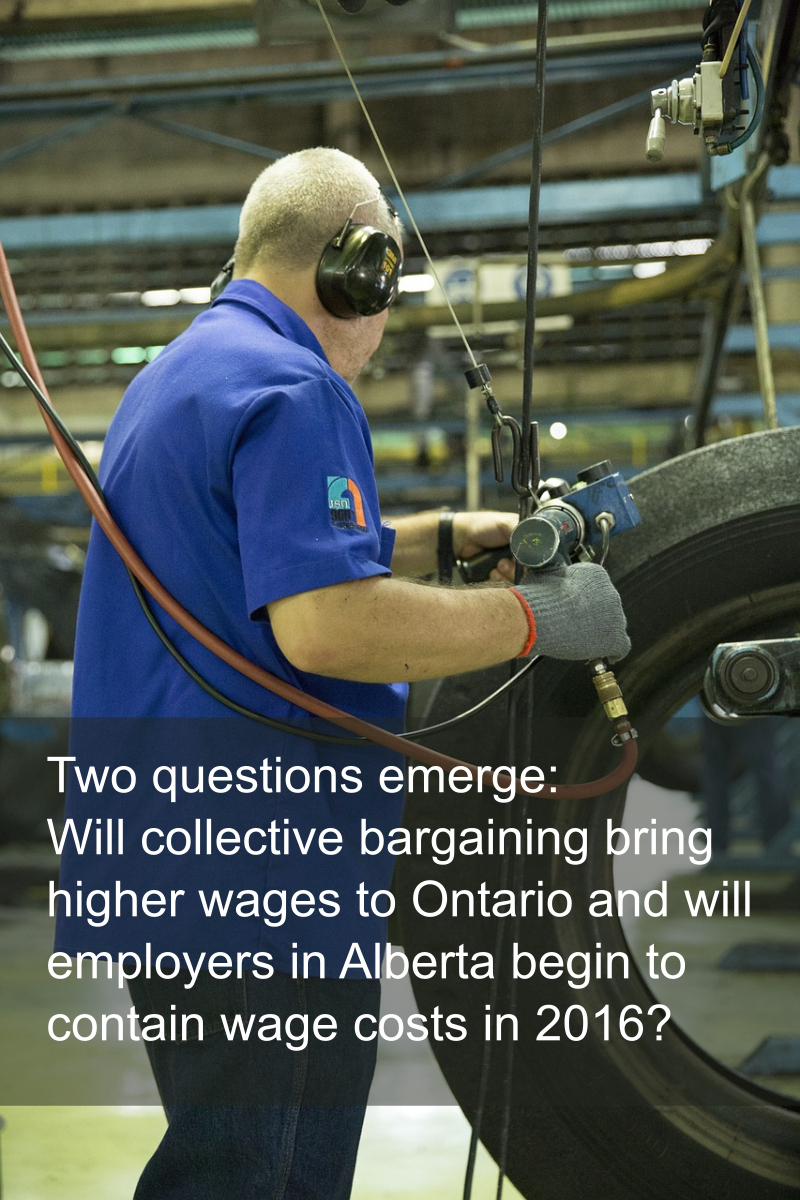 The United Auto Workers Union at Ford and Chrysler have just settled their agreements in the U.S., with only skilled trades workers at General Motors holding up a final settlement. The UAW’s primary bargaining goal was to return production workers to a single, uniform seniority wage structure by eliminating the second tier for newer workers. The two sides agreed to achieve this over an eight year period. Declining U.S. unemployment (5% in October 2015), an economy that’s been clipping along, and strong car sales created a good year for bargaining from the UAW perspective. U.S. workers are getting their first wage increases in more than a decade: 3 percent raises in the first and third years of the contract and lump-sum bonuses in the second and fourth years.
Canada’s auto workers are coming off a four-year agreement ratified in 2012 when the Canadian dollar was at par with the U.S. dollar. How will they fare in 2016 in light of an unemployment rate stubbornly set at 7%, a pending new free trade deal, and the Canadian dollar trading at a ten-year low? Bolstered by a new government that was elected with a friendly hand reaching out to labour, workers may expect an outcome that includes higher wages and better benefits.
Could we see hourly wages for skilled trades in Canadian auto plants rise as high as the $59 per hour Millwrights earn in Alberta at companies like Suncor? On average Ontario wages for manufacturing, management, and skilled trades trail western Canada by as much as 25%—see our millwright and electrician salary surveys for recent hourly rate data from a variety of employers. With plants across Canada still desperate to find maintenance people to keep plants running smoothly, skilled trades wages may rise in the upcoming negotiation.
The majority of Unifor members are production workers who do not have the same job prospects as maintenance employees, so job security be a more important issue than pay raises. With the Canadian dollar currently trading at less than 75 cents to the U.S. dollar, the cost of paying Canadian auto workers is significantly less than it has been over the last ten years. This, combined with lower health care costs in Canada, would seem to give Unifor a slight edge at the bargaining table. This advantage could be negated by the threat of moving jobs to Mexico, the U.S., and other international locations as part of the Trans-Pacific Partnership. Production workers shouldn’t expect large gains and this may hold the line on wages for tens of thousands of Ontario workers.
Interestingly, just as the collective agreements with the big automakers expire, so does Suncor’s oil sands agreement which provides $59.37 per hour for millwrights, industrial electricians and machinists, compared to $40.58 + $1 Consumer Price Index bonus for Ford trades employees. Alberta agreements in manufacturing, mining, and oil and gas—covering about 12,000 employees—will be negotiated in a less favourable environment than the profitable auto manufacturing industry in 2016.
We’ll be watching for answers to two important questions: Will collective bargaining bring higher wages to Ontario and will employers in Alberta begin to contain wage costs in 2016?