Northeastern British Columbia’s unemployment rate is 5.5% — the lowest in the country — and the expectation is that there will be a 41% increase in the number of job openings by 2022. That translates to 18,400 new jobs in an area that currently employs 39,200. This region has the highest participation rate in the province so it’s not like there are people sitting at home who would enter the workforce if only there were better jobs available.

Where The Jobs Are

These additional 18,400 jobs are expected to be fueled by oil and gas industry expansion and does not include the impact of attrition due to retirement or people moving out of the region. Some of this growth will remain elusive until oil prices rebound but some of it is happening right now. When prices rebound, remote areas like Dawson Creek, Fort St. John and Fort Nelson will face challenging and expensive recruitment needs.
British Columbia’s largest natural gas plant is currently under construction by Veresen Inc., who is building the $860 million Sunrise natural gas processing plant near Dawson Creek. The plant will produce 40 full-time operational jobs and 1,100 jobs during construction. This is one of dozens of projects that are due to come on line in the next seven years.

Construction projects will likely require employers to hire people from outside the region for much of the work adding what I see as 10-20% in costs and lower productivity. Many of the permanent hires will have to be recruited from outside the region at very high costs while some will be trained by Northern Lights College; others will be recruited from existing area employers. Oil and gas jobs typically pay 20-40% more than other industries so forestry and construction employers could lose people or will have to bear higher payroll costs to retain employees.
Recruiting people to relocate from other parts of Canada is not easy; the B.C. Government has even tried to maintain special programs to allow employers in the northeast to recruit outside of Canada. One of the problems is the cost of relocation. The average cost of relocating in Canada according to the Canadian Relocation Council is $64,000. Relocation to a region with low vacancy rates, high housing costs, little public transit and steep heating costs is daunting for workers, and is even more expensive for those with families. Interestingly, of 143 jobs listed on Craiglist for the region, only two jobs mention anything about relocation costs being reimbursed.
Northeastern B.C. will face an uphill battle to recruit and retain people as commodity prices rebound. Companies will have difficulty finding and retaining everyone from general managers to general labourers. The employers we know in Dawson Creek will not find this surprising as they have spent years trying to recruit everything from college instructors to heavy duty mechanics.
Below is a list of jobs the B.C. Government thinks will be most in demand. 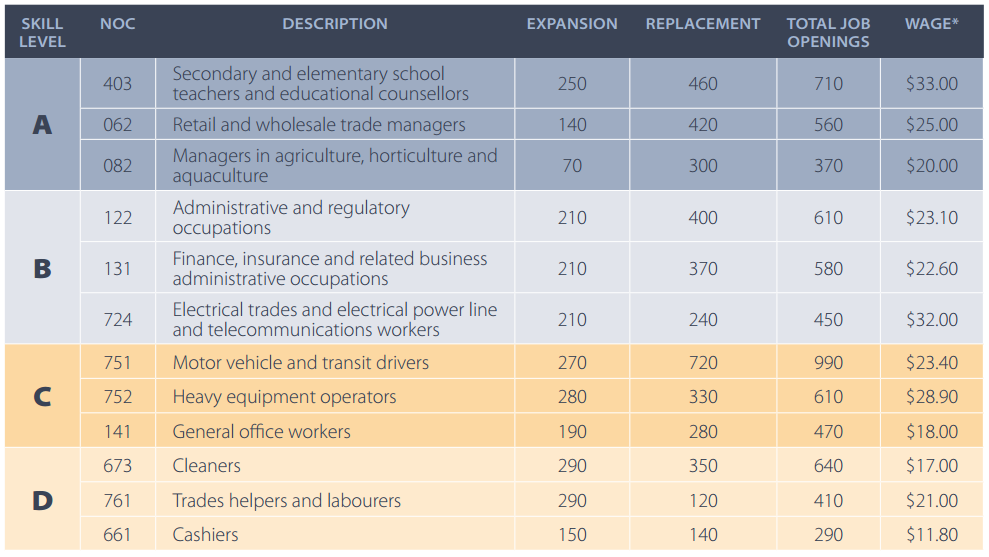