With a new government comes lots of changes for employers. It looks like employment standards and labour relations across the country could see massive changes. 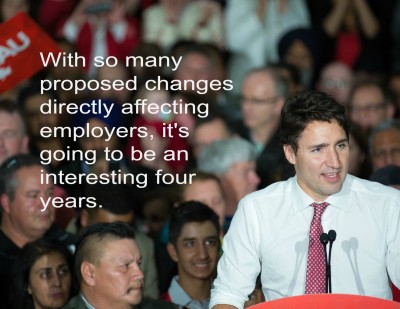 1. The Federal Jobs Grant program, which turned into a training fund for companies to train existing staff, will likely be scrapped if the provinces get their way and changed back into a provincial patchwork of training programs for the unemployed. The $2 billion a year spent on Labour Market Agreements from the Employment Insurance fund will increase to $2.5 billion a year, so do not expect any more rate reductions in employer-paid EI premiums. There has been mention of an additional $200 million in training programs, presumably targeting non-EI eligible candidates, and $50 million to renew and expand funding to the Aboriginal Skills and Employment Training Strategy, and provide $25 million each year for training facilities delivered in partnership with labour unions. Hopefully employers can expect better prepared, job-ready, unemployed candidates.
2. Maternity leave will be extended for up to 18 months, so an increase from 52 weeks to 72 weeks. This creates a huge increase in the amount of time positions will need to be back filled and more retraining for parents after their leave.
3. A new law would give the right to employees to make a formal request for more flexible working conditions, such as flexible start and finish times, or the ability to work from home. Ruth Eden wrote about this five months ago in Childcare and Women In the Workforce. Although it will be difficult for HR to now deal with these requests, it could have a positive impact on women in the workplace. This only covers federally-regulated industries but we can expect they will work closely with the Liberal governments in Ontario and British Columbia to change employment standards legislation along with Alberta and other left-leaning provinces.
4. Repeal Bills C-377 and C-525 making it easier for unions to form in new workplaces and reducing employers’ knowledge of union spending. C-525 had required a two-stage process for unionization of a new bargaining unit. It will likely change to only requiring the signing of union cards and do away with the requirement for a secret ballot. With changes to the Federal Labour code it is likely we will see pressure placed on provincial governments for unions to win the same rights to certify.
5. Reduce the waiting period for Employment Insurance benefits. When a worker loses their job and applies for EI, they will only be without income for one week, not two. The Liberals will also reverse Stephen Harper’s 2012 EI reforms that force unemployed workers to move away from their communities to take lower-paying jobs. This does not bode well for communities and areas with high employment and tons of job vacancies like Whistler and Fernie, BC, and the provinces of Alberta and Saskatchewan when commodity prices rebound and unemployment drops below 4%.
It is going to be an interesting four years for employers and HR across the country!