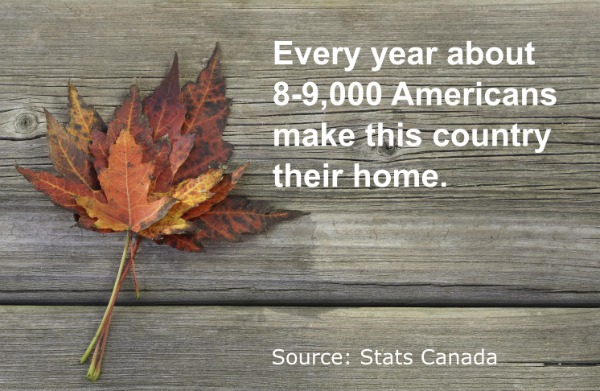 Over 50,000 Americans come to work in Canada every year and discover Thanksgiving happens a month early on this side of the border. For the past ten years, more and more Americans have traveled to Canada to work under NAFTA (Professionals), International Mobility (Athletes), and the Temporary Foreign Worker Programs. The ability of Canadians and Americans to work across the border—and in some cases enjoy two Thanksgiving meals—has enabled us to tap into one of the largest and best educated labour forces in the world.
One of the main ways that Americans come to work in Canada is through NAFTA, the North American Free Trade Agreement, which covers professionals like engineers, scientific technicians and technologists, nurses, but surprisingly, not practicing doctors. Canada’s International Mobility program, which covers a ton of agreements including GATTS, allows the second largest group of Americans to work in Canada (see chart below). It includes professional sports players like Dustin Byfuglien of the Winnipeg Jets and most of the great Toronto Blue Jays team that did so well this year.
Every year about 8-9,000 Americans decide to make this country their home and become permanent residents. The number of Americans making Canada their permanent home peaked in 2008 at over 10,000 and hasn’t recovered. Our new Prime Minister might attract a little attention to Canada but translating it into employers from Vancouver to St. John’s, Newfoundland, getting their hands on the USA’s best and brightest will not be easy. The low Canadian dollar, high cost of housing and a stubborn unemployment rate will likely keep U.S. workers moving here temporarily, but not permanently.
When commodity prices rebound and the Canadian dollar rises, Thanksgiving will come early again for more Americans. In the meantime enjoy your turkey!