Every year billions of dollars are earned by Canadians working on the road — in temporary, camp, or permanent jobs — in provinces where they do not keep a residence. 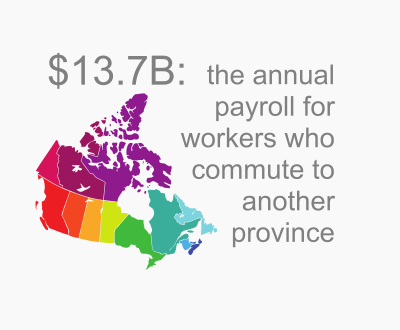 Anecdotal reports have always said that the Atlantic provinces, with higher unemployment, have the most people working in other provinces. We hear jokes hinting that there are more Newfoundlanders in Fort McMurray than there are Albertans. The truth is 54,000 Albertans work across the country which is more than twice the 20,000 Newfoundlanders who work outside the province of NL.
Millions of Canadians from all over the country work in another province and billions of dollars in wages and benefits move across provincial lines by direct deposit while workers travel in cars, buses and by the plane load. Total payroll for the 420,000 workers who commute on a monthly, weekly, or daily basis: $13.7 billion.

Interprovincial Employment: Who Spends the Most?

Ontario employers paid out $4.9 billion; Alberta, $3.5 billion; Quebec, $1.8 billion; BC, $925 million; Saskatchewan, $850 million to employees who live outside of the province. Interestingly out of these larger economies Saskatchewan has the highest percentage of out of province employees with 4.5% outside of the Territories where 10-22% of the territories payroll earnings go to workers from outside of the province.
So are Ontario and Alberta giving away $4.9 billion and $3.5 billion in payroll earnings driving up the cost of homes in other provinces? If we look a little closer it turns out provinces that are side by side, with similar industries, exchange the most labour. So it may assist in averaging out home prices in some areas within commuting distance; the number of extra-provincial workers compared to the total workforce is likely not driving up costs.
Saskatchewan and Alberta, with Oil and Gas and Agriculture, have lots of people who earn money in the neighboring province including the town of Lloydminister which straddles the Saskatchewan and Alberta borders. Employees in the Ottawa-Gatineau area of Ontario and Quebec regularly commute to work and make up a large portion of the interprovincial employment between the two provinces.
Alberta accounts for 60% of the employment income that people from BC earn out of province. While for those from Newfoundland the percentage of earnings from Alberta is close to 56%, the percentage of their population and therefore the earnings are much smaller. Saskatchewan road warriors earn 77% of their interprovincial money from Alberta. Nowhere beats Quebec for the 91% of their road warriors earning their money in Ontario.
One area of concern is the 22-42% of the work force in the Territories that commute from out of province. Serious study and investment needs to be made by employers and the government to ensure local education and training experiences can be gained by local unemployed workers in the Territories.
Source: Statistics Canada, Interprovincial Employment in Canada